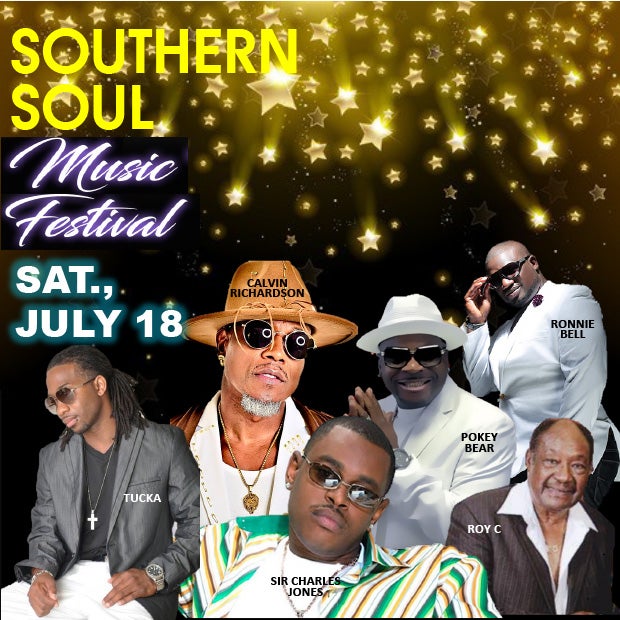 The Altria Theater is proud to welcome the Southern Soul Music Festival featuring Tucka, Pokey Bear, Calvin Richardson, Roy C, Sir Charles Jones and Ronnie Bell to Richmond for the first time. A combination of blues, country, early rock and roll, and with a strong gospel influence, Southern Soul was popular in the 1960s and 1970s but has enjoyed a resurgence that has seen it return to prominence in recent years. The concert will be held at Altria Theater on Saturday, July 18, 2020 at 8PM.

Tickets are on sale now at the Altria Theater Box Office, online at Altria Theater.com or Etix.com and by phone charge at 800-512-ETIX (3849). Tickets start at $82.50. Additional fees apply. Artists are subject to change. All sales are final – no refunds or exchanges.

Tucka
TUCKA is a new voice that has been winning over fans with his signature sound for the past few years. Whether it was his own R&B Swing Hits or featuring on other artist remixes, he has come up with his own sound that is a combination of influences, including R&B and Soul greats Otis Redding, R. Kelly, Sam Cooke, Jackie Wilson and more, as well as the sounds from his southwest Louisiana roots.

Calvin Richardson
Calvin Richardson, a multi-Grammy Award nominated singer/songwriter affectionately dubbed “The Soul Prince”, has been delighting fans with his straight-shooting, no holds barred southern Soul. You know when the iconic Soul man Charlie Wilson calls you “one of the most talented artists in the business” that you are truly special. USA Today declares Richardson is “influenced by vintage R&B and his gritty vocals set him apart from his smoother contemporaries…fresh vibes from a singer who respects and values his roots.”

Sir Charles Jones
Sir Charles Jones is an artist whose part-throwback, part-modern style of R&B is based on traditional Southern soul and blues. The vocalist, songwriter, producer, and multi-instrumentalist calls himself the Undisputed King of Southern Soul. Born in Ohio, raised in Alabama, and later based in Georgia he began his recording career in 2000 with a self-titled album. Sir Charles Jones has been a busy touring musician with headlining gigs and appearances at soul and blues festivals ever since.

Pokey Bear
Southern bluesman Pokey Bear injects a larger-than-life swagger into his R&B-infused bayou soul. The Baton Rouge party-starter was influenced by James Brown. A soul man at heart, he released his solo effort Josephine Son Pokey in 2014. The album included sensual dance tracks like "The Gingerbread Man" and "Mr. Hit It and Quit It" as well as his de facto theme song, "They Call Me Pokey."

The Legendary Roy C
Roy C is an American southern soul singer, songwriter and record executive, best known for his 1965 hit, "Shotgun Wedding." Another song, “Impeach the President,” which he recorded and produced with a high school group, the Honey Drippers, has had one of the most sampled drum tracks in hip hop music.

Ronnie Bell
Ronnie Bell is a church-reared independent R&B singer; his material has alternated between contemporary commercial sounds and slower numbers more in line with deeply Southern soul-blues. Raised in Walker, Louisiana, roughly 20 miles east of Baton Rouge, Bell started singing in choirs as a youngster. A self-titled three-song EP was released in 2012 as Bell’s recorded solo debut. Several singles such as "Cotton Candy" followed during the next few years, and led to a longer EP, BBMyself, in 2015. "I'll Pay the Shipping Cost" arrived in 2016.