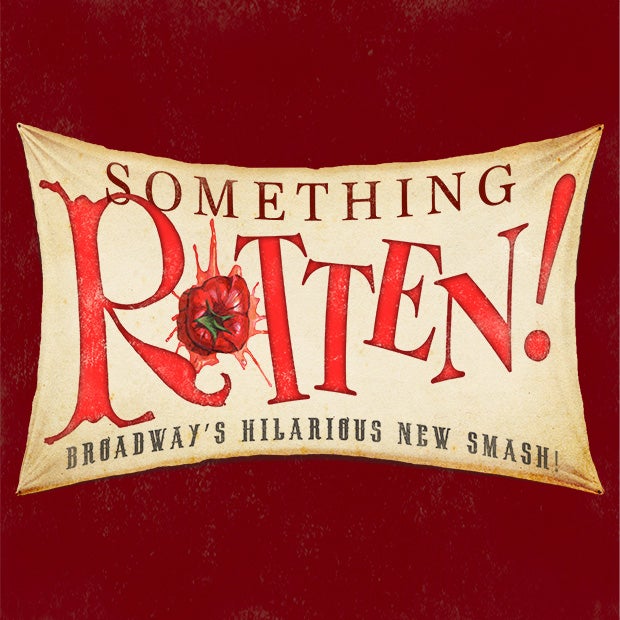 Tickets go on sale Friday at 10AM

Nominated for 10 Tony Awards, including Best Musical, Something Rotten! is “a deliriously entertaining new musical comedy that brings down the house!” (New York Post).

This hilarious new musical comedy tells the story of brothers Nick and Nigel Bottom, two playwrights stuck in the shadow of that Renaissance rockstar Will Shakespeare. When a soothsayer foretells the next big thing in theatre involves singing, dancing and acting at the same time, the Bottom brothers set out to write the world's very first MUSICAL! With the most singing, the most dancing and the most gut-busting laughs on Broadway, it's something wonderful... something for everyone... It's Something Rotten!, "the funniest musical comedy in at least 400 years" (Time Out New York)!

With its heart on its ruffled sleeve and sequins in its soul, Something Rotten! is an uproarious dose of pure Broadway fun and an irresistible ode to musicals — those dazzling creations that entertain us, inspire us, and remind us that everything’s better with an exclamation point!

Jam Theatricals (Presenter) is a Chicago-based entertainment company that presents and produces Broadway engagements throughout North America. Under the direction of co-founders Arny Granat and Steve Traxler, Jam Theatricals manages subscription seasons in 30 cities where they strive to bring the best of Broadway to the communities served. Current presentations include some of Broadway’ biggest blockbusters: Wicked, The Book of Mormon, Jersey Boys, The Phantom of the Opera and many more. Jam Theatricals and its principals have produced nearly 50 shows on Broadway and are the recipients of nine Tony Awards® for producing Glengarry Glen Ross (Best Revival of a Play, 2005), Monty Python’s Spamalot (Best Musical, 2005), The History Boys (Best Play, 2006), August: Osage County (Best Play, 2008), Hair (Best Revival of a Musical, 2009), Who’s Afraid of Virginia Woolf? (Best Revival of a Play, 2013), All The Way (Best Play, 2014), Fun Home (Best Musical, 2015) and The Color Purple (Best Revival of a Musical, 2016). For more information, please visit www.jamtheatricals.com.