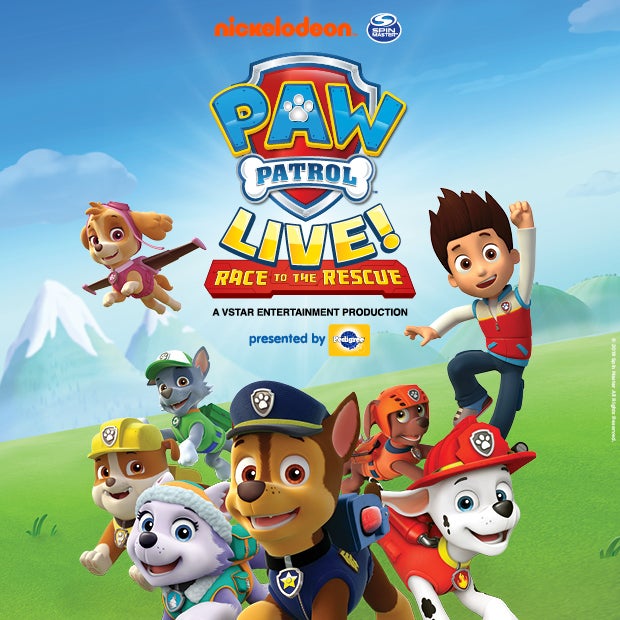 Join Your Favorite Pups for a Heroic Musical Adventure at Altria Theater, October 29 & 30

RICHMOND, VA (May 7, 2019) – No job is too big, no pup is too small! Nickelodeon and VStar Entertainment Group present PAW Patrol Live! “Race to the Rescue,” an action-packed, music-filled production, presented by Pedigree. The heroic pups from the top-rated animated preschool series PAW Patrol, produced by Spin Master Entertainment, will visit Altria Theater, October 29 & 30! Tickets for all three performances are on sale to the public May 17,2019 and can be purchased at www.altriatheater.com or by phone at 800-514-ETIX.

It's the day of the Great Adventure Bay Race between Adventure Bay’s Mayor Goodway and Foggy Bottom’s Mayor Humdinger, but Mayor Goodway is nowhere to be found. PAW Patrol to the rescue! Ryder summons Marshall, Chase, Skye, Rubble, Rocky, Zuma and Everest to rescue Mayor Goodway and to run the race in her place. Using their unique skills and teamwork, the pups show that “no job is too big, no pup is too small,” and share lessons for all ages about citizenship, social skills and problem-solving as they make several heroic rescues on their race to the finish line.

The show includes two acts and an intermission, and engages audiences with Bunraku puppetry, an innovative costuming approach that brings the PAW Patrol characters to life on stage with their vehicles and pup packs. The performance features up-tempo music and a cleverly written script that is a wonderful introduction to live theater for kids. Classic theatrical scenery, along with a high-tech video wall, visually transports families to an authentic PAW Patrol environment, including locations from the TV series, like Adventure Bay, The Lookout, Seal Island, Farmer Yumi's farm and Jake's Mountain. Special interactive video allows the audience to participate via interviews, solve clues with the Pups, follow Mayor Goodway and much more.

Nickelodeon, now in its 40th year, is the number-one entertainment brand for kids. It has built a diverse, global business by putting kids first in everything it does. The company includes television programming and production in the United States and around the world, plus consumer products, digital, recreation, books and feature films. Nickelodeon’s U.S. television network is seen in more than 90 million households and has been the number-one-rated kids’ basic cable network for 22 consecutive years. For more information or artwork, visit http://www.nickpress.com. Nickelodeon and all related titles, characters and logos are trademarks of Viacom Inc.