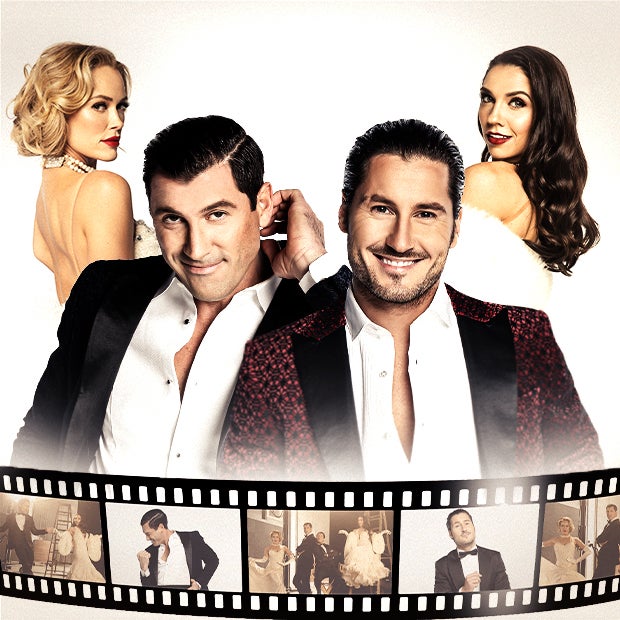 Richmond, Virginia (March 10, 2020) – Acclaimed dance duo and brothers MAKS & VAL CHMERKOVSKIY have announced their third nationwide tour MAKS & VAL LIVE 2020: MOTION PICTURES TOUR featuring special guests, spouses and celebrated dancers JENNA JOHNSON and PETA MURGATROYD. Take a trip through the most memorable movie moments through the eyes of Maks and Val. The foursome will reimagine some of your favorite dancing movie scenes as well as bring motion to iconic scenes where there was none before. Experience a dance driven narrative woven together by the movies that have moved us all.

Directed by Mark Swanhart (Dancing with the Stars Live, The Little Mermaid Live, Little Big Shots, La La Land), the 57-show tour will commence on Thursday, June 11 in Greensboro, NC and have its final show on Sunday, August 16 in Bethlehem, PA. Richmond audiences can enjoy the show on Monday, July 6, 2020 at 8PM at Altria Theater.

Tickets for MAKS & VAL LIVE 2020: MOTION PICTURES TOUR Featuring Special Guests Jenna Johnson & Peta Murgatroyd are on sale to the public starting Friday, March 13 at 10AM. American Express® Card Members can purchase tickets before the general public beginning Wednesday, March 11 at 10AM Local through Thursday, March 12 at 10PM Local in select markets. VIP packages are available at MaksandValTour.com giving fans the chance to purchase prime seats, meet and greets with the cast and backstage opportunities. For Richmond audiences, tickets will be available at the Altria Theater Box Office, online at AltriaTheater.com or Etix.com, and by phone at 800-512-ETIX (3849). Tickets start at $59.50. Additional fees apply.

“We are thrilled to get the whole family together to bring this incredible tour to life for our fans,” Maks said of the tour. “Movies have inspired all of us in our creative pursuits, and we can’t wait to pay homage to our favorite films through the medium we love most, dance!” Speaking on the family affair, Peta said, “We couldn’t think of a better way to spend our summer, doing what we love for our amazing fans.”

Val added, “In our past tours, we have dug into our own personal stories, allowing fans an inside look in to what it took to become the men and women we are today. This time, we are so excited to take our audience on a whole new adventure and show them a night at the movies through our eyes.” Jenna continued, “This is going to be so much fun performing familiar and iconic movie moments reimagined live on stage and set to our dancing for our fans. We can’t wait for the audience to see it!”

The Latin and ballroom dance foursome are no stranger to sharing the stage as Dancing with the Stars alums, boasting six Mirror Ball championships collectively between them. Although Maks and Val have been on tour together twice prior, MAKS & VAL LIVE 2020: MOTION PICTURES TOUR marks the first time the four will bring their talents together for a nationwide tour in what is sure to be a must-see dance event.

Originally opening its doors as a mosque in 1927, and completing a major renovation in 2014, Altria Theater was designed in Moorish Revival architectural style and is one of the best known and most striking buildings in Richmond, Virginia. It is located just west of the city’s downtown in the heart of the Virginia Commonwealth University campus, directly across from historic Monroe Park, and is the largest theater between New York and Atlanta. The 200,000 square foot theater has a seating capacity of 3,600 and hosts an enormously successful Broadway in Richmond series, the nationally acclaimed Richmond Forum, as well as countless concerts, kids shows, and comedians. In addition to the theater, the building boasts a beautiful Egyptian-styled ballroom and an abundance of functional space for corporate events, fundraisers, weddings, and private parties.