DANCING WITH THE STARS: Live! The Tour RETURNS WITH A BRAND-NEW SHOW THIS WINTER

DANCING WITH THE STARS: Live! The Tour

RETURNS WITH A BRAND-NEW SHOW THIS WINTER

TICKETS ON SALE FRIDAY, OCTOBER 7, AT 10AM LOCAL

(RICHMOND, VA) Dancing With the Stars is back on tour this winter to celebrate its 31st season with a brand-new live production, heading to Richmond, Virginia’s Altria Theater on 2/13/23! This year’s all-new stage show will feature your favorite professional dancers from the hit Disney+ Original series performing brand new numbers as well as some of the showstoppers featured in season 31. Audiences at Dancing with the Stars: Live! will have the opportunity to experience the excitement, glitz and glamour they see in the ballroom live, up-close, and personal. Tickets go on sale October 7, at 10AM local.

The tour delivers a spectacular night of electrifying dance performances from world-renowned dancers including Brandon Armstrong, Alan Bersten, Sasha Farber, Gleb Savchenko, Emma Slater, Britt Stewart, and So You Think You Can Dance winner Alexis Warr who now appears on Dancing with the Stars.

From our pros: “Getting to see the smiling faces of the people who vote for us on the show from home each and every week in-person is such a privilege – the fans are the reason why we love to do this tour! We cannot wait to travel to cities all across the country and share our passion for dance from coast to coast. Whether you’ve made a tradition of coming to the show every year or this is your first time getting to see us live, we promise to give you an unforgettable performance.”

Tickets for “Dancing with the Stars: Live!” go on sale starting this Friday, October 7, at 10AM local. Tickets will be available online at altriatheater.com, by phone at (800) 514-3849 via Etix, or in-person at the Altria Theater Box Office, located at 6 N. Laurel Street, open Monday-Friday, 10AM-2PM local.

As a courtesy reminder, Altria Theater urges ticket buyers to buy direct from the Altria Theater website or Box Office, or via Etix through phone sales at (800) 514-3849 or etix.com. All other ticketing sources are unauthorized sellers. More information on buying direct can be found at www.altriatheater.com/events/buy-direct.

“Dancing with the Stars: Live!” is produced by Faculty in association with BBC Studios Los Angeles Productions.

“Dancing with the Stars: Live!” Dates:

January 25 – Windsor, ON – The Colosseum at Caesars Windsor

January 26 – Windsor, ON – The Colosseum at Caesars Windsor

January 28 – Kitchener, ON – Centre in the Square

ASM Global is the world’s leading producer of entertainment experiences. It is the global leader in venue and event strategy and management—delivering locally tailored solutions and cutting-edge technologies to achieve maximum results for venue owners. The company’s elite venue network spans five continents, with a portfolio of more than 325 of the world’s most prestigious arenas, stadiums, convention, and exhibition centers, and performing arts venues Follow us on Facebook, Instagram, LinkedIn and Twitter. asmglobal.com

Faculty, formed by veteran manager and producer Jared Paul in partnership with Live Nation, the world’s leading live entertainment company, produces and creates world-class live branded entertainment and concerts. Faculty is responsible for some of the most successful global touring productions including the Faculty-managed New Kids on the Block recently completed 56-city Mixtape Tour, which sold over 1,000,000 tickets, and the Big Time Rush Forever Tour. Big Time Rush returned in 2022 after 9 years with sold out shows in the US and Mexico including stops at legendary venues such as Madison Square Garden. In 2022, Faculty produced the first-ever CHEER LIVE tour with stars from the Netflix series and are the long-time producers of the Dancing with the Stars: Live! Tour, Move Live on Tour (Derek Hough and Julianne Hough), Glee Live! In Concert!, America’s Got Talent Live!, American Idol Live!, and So You Think You Can Dance Live Tour. In 2017, Faculty and Paul created the acclaimed immersive pop-up art exhibit HAPPY PLACE, which started in Los Angeles before moving to locations across the US and Canada and most recently to Sydney, Australia and New Zealand.

BBC Studios, a global content company with bold British creativity at its heart, is a commercial subsidiary of the BBC. Able to take an idea seamlessly from thought to screen and beyond, its activities span content financing, development, production, sales, branded services, and ancillaries across both its own productions and programs and formats made by high-quality UK independents. Award-winning British programs made by the business are internationally recognized across a broad range of genres and specializations, with brands like Dancing with the Stars/Strictly Come Dancing, Top Gear, and Doctor Who. BBC.com, BBC Studios’ global digital news platform, provides up-to-the-minute international news, in-depth analysis and features to more than 139 million unique browsers each month. BBC Studios has offices in 20 markets globally, including ten production bases in the UK and production bases or partnerships in a further nine countries around the world. The company, which ordinarily makes around 2,000 hours of content a year for both the BBC and third parties including Apple, Netflix, and Migu, is a champion for British creativity around the world. It is also a committed partner for the UK’s independent sector through a mix of equity partnerships, content investment, and international distribution for program titles.

In the U.S, BBC Studios operates both a distribution business and one of its major production units. The production unit, based in Los Angeles, creates and produces adaptations of UK programs, as well as all new original programs, for linear and digital platforms in the U.S. This production unit is responsible for the phenomenally successful, Emmy®-winning Dancing with the Stars, the multi-award-winning Life Below Zero franchise, the revved up Top Gear America, and the popular reboot of the classic quiz show Weakest Link, among others. In scripted, the team has achieved success adapting British hits, including Call Me Kat (based on the UK format Miranda), Welcome to Flatch (This Country in the UK), and Ghosts for top U.S. broadcast networks.

Disney+ is the dedicated streaming home for movies and shows from Disney, Pixar, Marvel, Star Wars, and National Geographic, along with The Simpsons and much more. In select international markets, it also includes the general entertainment content brand, Star. The flagship direct-to-consumer streaming service from The Walt Disney Company, Disney+ is part of the Disney Media & Entertainment Distribution segment. The service offers an ever-growing collection of exclusive originals, including feature-length films, documentaries, live-action and animated series, and short-form content. With unprecedented access to Disney’s long history of incredible film and television entertainment, Disney+ is also the exclusive streaming home for the newest releases from The Walt Disney Studios. Disney+ is available as a standalone streaming service, as part of the Disney Bundle in the U.S. that gives subscribers access to Disney+, Hulu, and ESPN+, or as part of Combo+ in Latin America with Star+, the standalone general entertainment and sports streaming service in the region. For more, visit disneyplus.com, or find the Disney+ app on most mobile and connected TV devices. 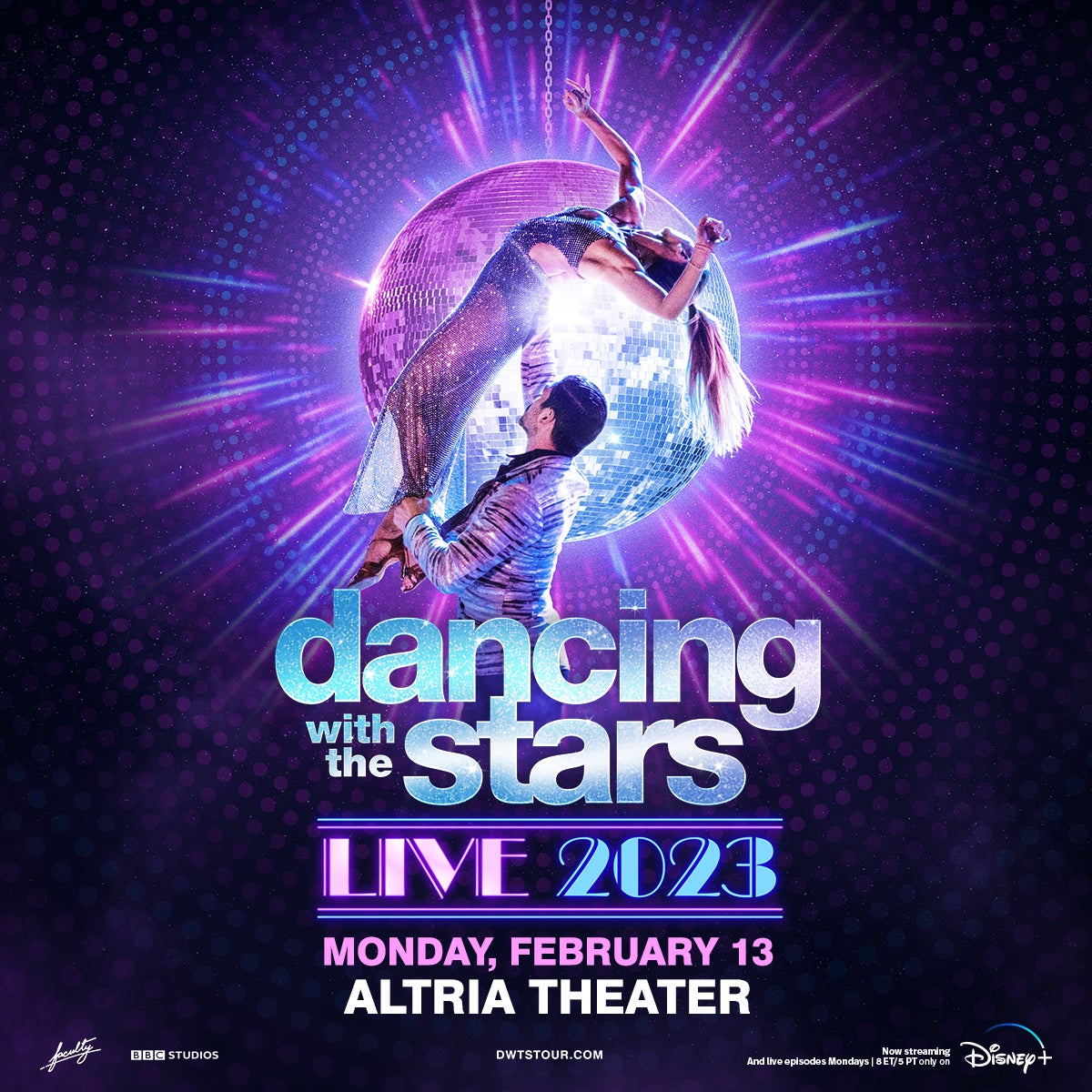 Dancing with the Stars Live!