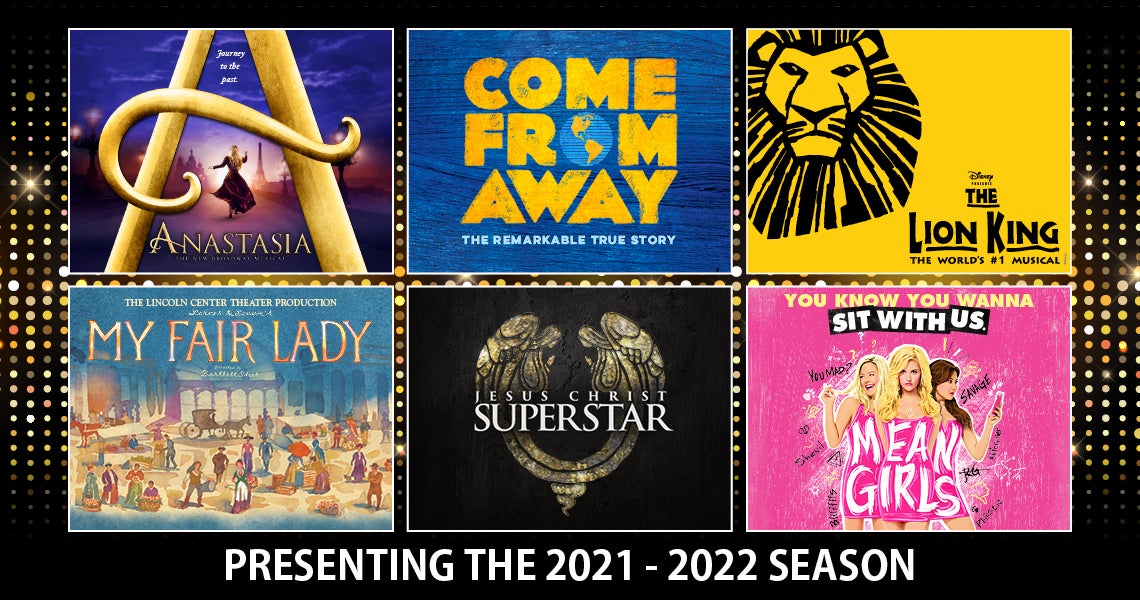 BROADWAY IN RICHMOND IS BACK!

SUBSCRIPTIONS GO ON SALE MONDAY, JUNE 28 AT 10AM

Richmond, VA -- Broadway In Richmond is delighted to welcome audiences back to the Altria Theater for the 2021 - 2022 season featuring three Richmond premieres, two Broadway classics, and the return of a blockbuster family favorite. Broadway In Richmond will also present two shows rescheduled from the 2019 - 2020 season.

The Richmond premiere of the beautifully staged ANASTASIA will kick off the season in October 2021, followed by another premiere of the remarkable true story about a small town that welcomed the world, COME FROM AWAY plays February 2022. The return of Disney’s THE LION KING will perform for two weeks in March 2022 plus two Broadway classics, the acclaimed Lincoln Center Theater production of Lerner & Loewe’s MY FAIR LADY starting in May 2022 and the iconic JESUS CHRIST SUPERSTAR in June of 2022. Concluding the season is the highly anticipated Richmond premiere of Tina Fey’s hilarious hit musical, MEAN GIRLS, in September 2022. All performances of the thirteenth Broadway In Richmond season will be engaged at Altria Theater including Fiddler On The Roof and The Band’s Visit rescheduled from the previous season.

Subscriptions go on sale Monday, June 28 at 10:00am allowing current subscribers to renew, and new subscribers to purchase their season tickets. Individual show tickets will be announced as each performance approaches. Group sales opportunities will be available for all shows.

The best way to guarantee seats to the hottest shows year after year, including the return of HAMILTON in the 2022 – 2023 season, is to subscribe to this season. Subscribers have the option to renew their seats and first options on upgrading seats, additional special ticket offers and the chance to purchase tickets to add-on shows before the general public. Subscription tickets are received via the mail prior to the performance to avoid box office lines and lost ticket insurance is included at no additional charge.

The five-show package starts as low as $215 (plus applicable fees). Subscription packages are available Tuesday through Sunday with best seats and pricing available Tuesday, Wednesday, and Thursday evenings. Call the Subscriber Hotline at 804-592-3401 to learn about additional package information or visit  www.BroadwayInRichmond.com.

All presentations have eight performances except for Disney’s THE LION KING, which has fifteen, and all shows are engaged at Altria Theater. Visit BroadwayInRichmond.com for additional information.

Inspired by the beloved films, the romantic and adventure-filled new musical ANASTASIA is on a journey to Richmond at last! From the Tony Award®-winning creators of the Broadway classic Ragtime, this dazzling show transports us from the twilight of the Russian Empire to the euphoria of Paris in the 1920s, as a brave young woman sets out to discover the mystery of her past. Pursued by a ruthless Soviet officer determined to silence her, Anya enlists the aid of a dashing conman and a lovable ex-aristocrat. Together, they embark on an epic adventure to help her find home, love, and family.  “One of the most gorgeous shows in years!” (New York Observer).

Broadway’s COME FROM AWAY is a Best Musical winner all across North America! This New York Times Critics’ Pick takes you into the heart of the remarkable true story of 7,000 stranded passengers and the small town in Newfoundland that welcomed them. Cultures clashed and nerves ran high, but uneasiness turned into trust, music soared into the night, and gratitude grew into enduring friendships. Don’t miss this breathtaking new musical written by Tony® nominees Irene Sankoff and David Hein, and helmed by Tony-winning Best Director, Christopher Ashley. Newsweek cheers, “It takes you to a place you never want to leave!” On 9/11, the world stopped. On 9/12, their stories moved us all.

More than 100 million people around the world have experienced the phenomenon of Disney’s THE LION KING, and now you can, too, when Richmond’s best-loved musical returns to the Altria Theater.  Winner of six Tony Awards®, including Best Musical, this landmark musical event brings together one of the most imaginative creative teams on Broadway.  Tony Award®-winning director Julie Taymor brings to life a story filled with hope and adventure set against an amazing backdrop of stunning visuals.  THE LION KING also features some of Broadway’s most recognizable music, crafted by Tony Award®-winning artists Elton John and Tim Rice.  There is simply nothing else like THE LION KING.

From Lincoln Center Theater that brought you The King & I and South Pacific, comes “a sumptuous new production of the most perfect musical of all time” (Entertainment Weekly), Lerner & Loewe’s MY FAIR LADY.  Director Bartlett Sher’s glowing production is “thrilling, glorious and better than it ever was” (New York Times).  “Every so often a revival comes along that reminds you how indispensable great theater can be” (NY1).

Boasting such classic songs as “I Could Have Danced All Night,” “The Rain in Spain,” “Wouldn’t It Be Loverly” and “On the Street Where You Live,” MY FAIR LADY tells the story of Eliza Doolittle, a young Cockney flower seller, and Henry Higgins, a linguistics professor who is determined to transform her into his idea of a “proper lady.”  But who is really being transformed?

JESUS CHRIST SUPERSTAR is an iconic musical phenomenon with a world-wide fan base. In celebration of its 50th Anniversary, a new mesmerizing production comes to North America. Originally staged by London’s Regent’s Park Open Air Theatre and helmed by the acclaimed director Timothy Sheader (Crazy for You, Into the Woods) and award-winning choreographer Drew McOnie (King Kong, Strictly Ballroom), this production won the 2017 Olivier Award for Best Musical Revival garnering unprecedented reviews and accolades. Appealing to both theater audiences and concert music fans, this production pays tribute to the historic 1971 Billboard Album of the Year while creating a modern, theatrical world that is uniquely fresh and inspiring.

Featuring award-winning music by Andrew Lloyd Webber and lyrics by Tim Rice, JESUS CHRIST SUPERSTAR is set against the backdrop of an extraordinary series of events during the final weeks in the life of Jesus Christ as seen through the eyes of Judas. Reflecting the rock roots that defined a generation, the legendary score includes ‘I Don’t Know How to Love Him’, ‘Gethsemane’ and ‘Superstar’.

Cady Heron may have grown up on an African savanna, but nothing prepared her for the vicious ways of her strange new home: suburban Illinois. Soon, this naïve newbie falls prey to a trio of lionized frenemies led by the charming but ruthless Regina George. But when Cady devises a plan to end Regina’s reign, she learns the hard way that you can’t cross a Queen Bee without getting stung.

New York Magazine cheers, “MEAN GIRLS delivers with immense energy, a wicked sense of humor and joyful inside-jokery.” USA Today says, “We’ll let you in on a little secret, because we’re such good friends: GET YOUR TICKETS NOW!”