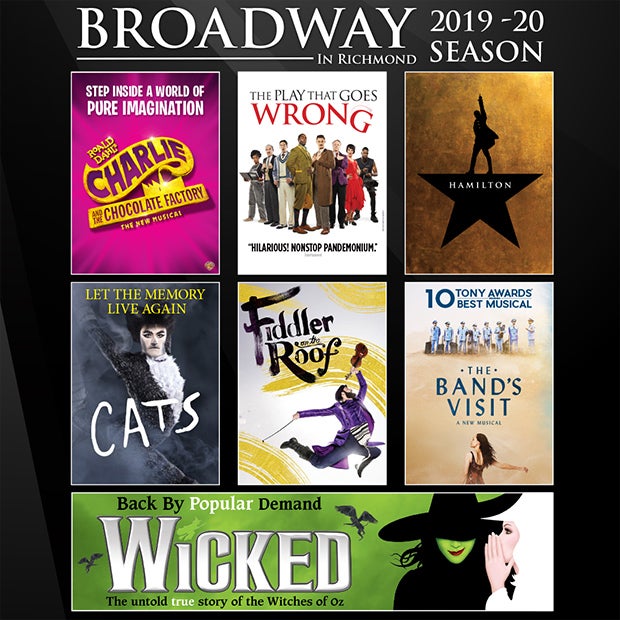 Richmond, VA – Jam Theatricals is thrilled to announce the Broadway musical, HAMILTON, will play its premiere Richmond engagement and anchor the 2019 – 2020 Broadway In Richmond season. The season also features THE BAND’S VISIT, winner of ten 2018 Tony Awards including Best Musical, the Tony- nominated newly staged revival of FIDDLER ON THE ROOF, the record-breaking musical spectacular CATS and the Richmond premieres of ROALD DAHL’S CHARLIE AND THE CHOCOLATE FACTORY and THE PLAY THAT GOES WRONG plus Richmond’s most “popular” musical, WICKED. Sales for new and renewing subscriptions begin today, February 11, 2019. Group sales tickets will be available later in the spring – date to be announced. On-sale dates for individual tickets will be announced as each performance approaches. All Broadway In Richmond shows are engaged at Altria Theater.

New subscription packages are available this season for Tuesday, Wednesday and Thursday evenings which means the best seats in the house are available for new subscribers!

“We are so excited to bring HAMILTON to Richmond along with what just may be our strongest lineup of classics, premieres and favorites! The size and strength of the Richmond subscription base certainly impacts the shows we are able to bring to Altria Theater and we appreciate the continuous support,” said Steve Traxler, President and Co-Founder of Jam Theatricals. “Our desire to bring a season of full-week engagements has been realized and that creates great opportunities for new and existing subscribers and patrons.”

The best way to guarantee seats to the hottest shows is to subscribe to a season subscription package. Subscribe to our six-show package starting as low as $310 with the option of adding WICKED. Call the Subscriber Hotline at 804-592-3401, Monday – Friday, 10am to 5pm to learn about additional package information or visit www.BroadwayInRichmond.com.

Enjoy the many exclusive benefits of being a subscriber including a guarantee of the same great seats to each season show, the option to renew those seats from year to year, and first options on upgrading seats. Subscribers also receive additional special ticket offers and the chance to purchase tickets to add-on shows before the general public. Subscription tickets are received via mail prior to the performance to avoid box office lines and lost ticket insurance is included at no additional charge.

ROALD DAHL’S CHARLIE AND THE CHOCOLATE FACTORY: Roald Dahl's amazing tale is now Richmond’s golden ticket! It's the perfect recipe for a delectable treat: songs from the original film, including "Pure Imagination," "The Candy Man," and "I've Got a Golden Ticket," alongside a toe-tapping and ear-tickling new score from the songwriters of Hairspray.

Willy Wonka is opening his marvelous and mysterious chocolate factory...to a lucky few. That includes Charlie Bucket, whose bland life is about to burst with color and confection beyond his wildest dreams. He and four other golden ticket winners will embark on a mesmerizing joyride through a world of pure imagination. Now's your chance to experience the wonders of Wonka like never before – get ready for Oompa-Loompas, incredible inventions, the great glass elevator, and more, more, more at this everlasting showstopper!

What would happen if Sherlock Holmes and Monty Python had an illegitimate Broadway baby? You’d get THE PLAY THAT GOES WRONG, Broadway & London’s award-winning smash comedy! Called “A GUT-BUSTING HIT” (The New York Times) and “THE FUNNIEST PLAY BROADWAY HAS EVER SEEN” (HuffPost), this classic murder mystery is chock-full of mishaps and madcap mania delivering “A RIOTOUS EXPLOSION OF COMEDY” (Daily Beast).

Welcome to opening night of The Murder at Haversham Manor where things are quickly going from bad to utterly disastrous. With an unconscious leading lady, a corpse that can’t play dead, and actors who trip over everything (including their lines), it’s “TONS OF FUN FOR ALL AGES” (HuffPost) and “COMIC GOLD” (Variety) – sure to bring down the house!

HAMILTON is the story of America's Founding Father Alexander Hamilton, an immigrant from the West Indies who became George Washington's right-hand man during the Revolutionary War and was the new nation’s first Treasury Secretary. Featuring a score that blends hip-hop, jazz, blues, rap, R&B, and Broadway, HAMILTON is the story of America then, as told by America now.

With book, music and lyrics by Lin-Manuel Miranda, direction by Thomas Kail, choreography by Andy Blankenbuehler and musical supervision and orchestrations by Alex Lacamoire, HAMILTON is based on Ron Chernow’s biography of Founding Father Alexander Hamilton.

FIDDLER ON THE ROOF: Tony®-winning director Bartlett Sher and the team behind South Pacific, The King and I and 2017 Tony-winning Best Play Oslo, bring a fresh and authentic vision to this beloved theatrical masterpiece from Tony winner Joseph Stein and Pulitzer Prize winners Jerry Bock and Sheldon Harnick.

The original production won ten Tony Awards, including a special Tony for becoming the longest-running Broadway musical of all time. You’ll be there when the sun rises on this new production, with stunning movement and dance from acclaimed Israeli choreographer Hofesh Shechter, based on the original staging by Jerome Robbins. A wonderful cast and a lavish orchestra tell this heartwarming story of fathers and daughters, husbands and wives, and the timeless traditions that define faith and family. Featuring the Broadway classics “Tradition,” “If I Were a Rich Man,” “Sunrise, Sunset,” “Matchmaker, Matchmaker” and “To Life,” FIDDLER ON THE ROOF will introduce a new generation to this uplifting celebration that raises its cup to joy! To love! To life!

Spend an evening in the company of unforgettable strangers at THE BAND’S VISIT—now one of the most celebrated musicals ever. It rejoices in the way music brings us to life, brings us to laughter, brings us to tears, and ultimately, brings us together.

In an Israeli desert town where every day feels the same, something different is suddenly in the air. Dina, the local café owner, had long resigned her desires for romance to daydreaming about exotic films and music from her youth. When a band of Egyptian musicians shows up lost at her café, she and her fellow locals take them in for the night. Under the spell of the night sky, their lives intertwine in unexpected ways, and this once sleepy town begins to wake up.

CATS, the record-breaking musical spectacular by Andrew Lloyd Webber that has captivated audiences in over 30 countries and 15 languages, is now on tour across North America!

Audiences and critics alike are rediscovering this beloved musical with breathtaking music, including one of the most treasured songs in musical theater—"Memory”. Winner of 7 Tony Awards® including BEST MUSICAL, CATS tells the story of one magical night when an extraordinary tribe of cats gathers for its annual ball to rejoice and decide which cat will be reborn. The original score by Andrew Lloyd Webber (The Phantom of the Opera, School of Rock, Sunset Boulevard), original scenic and costume design by John Napier (Les Misérables), all-new lighting design by Natasha Katz (Aladdin), all-new sound design by Mick Potter, new choreography by Andy Blankenbuehler (Hamilton) based on the original choreography by Gillian Lynne (Phantom) and direction by Trevor Nunn (Les Misérables) make this production a new CATS for a new generation!

WICKED, the Broadway sensation, looks at what happened in the Land of Oz…but from a different angle. Long before Dorothy arrives, there is another young woman, born with emerald-green skin—smart, fiery, misunderstood, and possessing an extraordinary talent. When she meets a bubbly blonde who is exceptionally popular, their initial rivalry turns into the unlikeliest of friendships…until the world decides to call one “good,” and the other one “wicked.”

From the first electrifying note to the final breathtaking moment, WICKED—the untold true story of the Witches of Oz—transfixes audiences with its wildly inventive story that USA Today cheers is “a complete triumph! An original musical that will make you laugh, cry, and think.”

Jam Theatricals (Presenter) is a Chicago-based entertainment company that presents and produces Broadway engagements throughout North America and manages subscription seasons in 28 cities where they strive to bring the best of Broadway to the communities served. Current presentations include some of Broadway’s biggest blockbusters: Wicked, The Book of Mormon, Jersey Boys, The Phantom of the Opera and many more. Jam Theatricals currently manages and operates the National Theatre in Washington D.C. Built in 1835, it is the oldest theatre for touring Broadway. Jam Theatricals and its principals have produced over 50 shows on Broadway, and have earned ten Tony Awards® for the following shows: Glengarry Glen Ross (Best Revival of a Play, 2005), Monty Python’s Spamalot (Best Musical, 2005), The History Boys (2006), August: Osage County (2008), Hair (2009), Who’s Afraid of Virginia Woolf? (2013), All The Way (2014), Fun Home (2015), The Color Purple (2016), and The Band’s Visit (2018). For more information, please visit www.JamTheatricals.com.