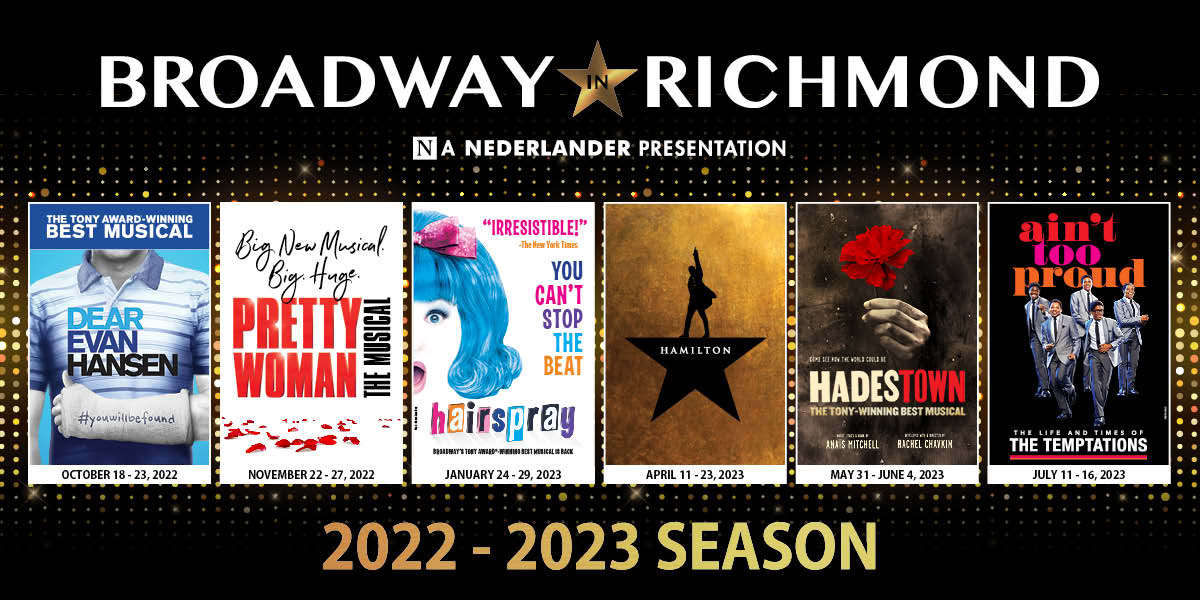 Richmond, VA – Presenter, Nederlander National Markets, is elated to announce the biggest Broadway In Richmond 2022 - 2023 season ever, showcasing the return of HAMILTON, five Richmond premieres, and three blockbuster add-on shows. Never before has Broadway In Richmond presented nine musicals in a single season which signifies Richmond theatergoers love Broadway and Nederlander National Markets is pleased to reciprocate by bringing the biggest and best shows currently touring the nation.

The return of HAMILTON will occur in April 2023 for two weeks and the Richmond premieres of DEAR EVAN HANSEN - October 2022, PRETTY WOMAN: THE MUSICAL - November 2022, HADESTOWN - May/June 2023,and AIN’T TOO PROUD - July 2023, will grace Altria Theater’s stage with one-week engagements. The irresistible HAIRSPRAY will return to Richmond in January 2023. For the first time, Broadway In Richmond is offering three add-on shows with WICKED - August 2022, THE BOOK OF MORMON - February 2023, and LES MISÉRABLES - March 2023, also at Altria Theater.

Subscriptions go on sale Monday, April 25 at 10:00am allowing current subscribers to renew online, and new subscribers to purchase their season tickets via the Broadway In Richmond website. The benefits of becoming a subscriber are many, including guaranteeing seats year after year to the hottest shows, options on upgrading seats, additional special ticket offers, payment plans, pre-paid parking availability and the chance to purchase tickets to add-on shows before the general public. Subscribers also have personal online account access, lost ticket insurance and subscriber support, all included at no additional charge. To avoid box office and will call lines, Broadway In Richmond subscribers receive electronic tickets prior to the performance via email or their online account.  These tickets can be printed at home or stored on smart phones for convenient entry to the theater.

Three Shows Available To Add On To Subscription Packages

The six-show package starts as low as $265.50 (plus applicable fees). Subscription packages are available Tuesday through Sunday with fantastic seat locations and the best pricing available Tuesday, Wednesday, and Thursday evenings. Call the Subscriber Hotline at 804-592-3401 or visit  BroadwayInRichmond.com to learn about additional package information and other subscriber benefits. Individual show tickets will be announced as each engagement approaches. Group sales opportunities will be available for all shows. Schedule is subject to change.

Broadway In Richmond started presenting in 2009 with this season officially being the 14th although shows in the Spring and Fall of 2020 through the Spring 2021 were canceled due to the pandemic and in most cases were rescheduled.

Broadway In Richmond’s official ticketing partner is ETIX and we remind patrons to purchase tickets online at these official websites, www.BroadwayInRichmond.com and www.AltriaTheater.com and to please exercise caution to guard against fraud.

Nederlander National Markets, a Nederlander Presentation based in Chicago, is one of the largest presenters of Broadway series and engagements across North America. Currently, they oversee subscription seasons in more than 20 cities throughout the country.

Nederlander continues the tradition of operating historic theatres, producing and presenting the best in theatrical and concert events, and innovating new ways to engage future generations of theatergoers.

DEAR EVAN HANSEN, winner of six Tony Awards® including Best Musical, has struck a remarkable chord with audiences and critics everywhere, including The Washington Post who says DEAR EVAN HANSEN is “Theatrical magic. One of the most remarkable shows in musical theatre history.” The New York Times calls it “a breathtaking knockout of a musical.” And NBC Nightly News declares the musical “an anthem resonating on Broadway and beyond.”

Based on one of Hollywood’s most beloved romantic stories of all time, springs to life with a powerhouse creative team led by two-time Tony Award®-winning director and choreographer Jerry Mitchell (Hairspray, Kinky Boots, Legally Blonde).

Brought to the stage by lead producer Paula Wagner, PRETTY WOMAN: THE MUSICAL features an original score by Grammy® winner Bryan Adams and Jim Vallance (“Summer of ’69”, “Heaven”), and a book by the movie’s legendary director Garry Marshall and screenwriter J. F. Lawton. PRETTY WOMAN: THE MUSICAL will lift your spirits and light up your heart. “If you love the movie, you’ll love the musical!” (BuzzFeed News). Are you ready to fall in love all over again?

You Can’t Stop the Beat! HAIRSPRAY, Broadway’s Tony Award-winning musical comedy phenomenon is back on tour! Join 16-year-old Tracy Turnblad in 1960’s Baltimore as she sets out to dance her way onto TV’s most popular show. Can a girl with big dreams (and even bigger hair) change the world?

Featuring the beloved score of hit songs including “Welcome to the 60’s,” “Good Morning Baltimore” and “You Can’t Stop the Beat,” HAIRSPRAY is “fresh, winning, and deliriously tuneful!” (The New York Times).

HAMILTON is the story of America then, told by America now. Featuring a score that blends hip-hop, jazz, R&B and Broadway, HAMILTON has taken the story of American founding father Alexander Hamilton and created a revolutionary moment in theatre—a musical that has had a profound impact on culture, politics, and education. With book, music, and lyrics by Lin-Manuel Miranda, direction by Thomas Kail, choreography by Andy Blankenbuehler, and musical supervision and orchestrations by Alex Lacamoire, HAMILTON is based on Ron Chernow’s acclaimed biography. It has won Tony®, Grammy®, and Olivier Awards, the Pulitzer Prize for Drama, and an unprecedented special citation from the Kennedy Center Honors.

Welcome to HADESTOWN, where a song can change your fate. Winner of eight 2019 TonyAwards® including Best Musical and the 2020 Grammy® Award for Best Musical Theater Album, this acclaimed new show from celebrated singer-songwriter Anaïs Mitchell and innovative director Rachel Chavkin (Natasha, Pierre & The Great Comet of 1812) is a love story for today... and always.

HADESTOWN intertwines two mythic tales — that of young dreamers Orpheus and Eurydice, and that of King Hades and his wife Persephone — as it invites you on a hell-raising journey to the underworld and back. Mitchell’s beguiling melodies and Chavkin’s poetic imagination pit industry against nature, doubt against faith, and fear against love. Performed by a vibrant ensemble of actors, dancers and singers, HADESTOWN is a haunting and hopeful theatrical experience that grabs you and never lets go.

AIN’T TOO PROUD - The Life and Times of The Temptations is the electrifying new smash-hit Broadway musical that follows The Temptations’ extraordinary journey from the streets of Detroit to the Rock & Roll Hall of Fame.

Nominated for 12 Tony® Awards and the winner of the 2019 Tony Award for Best Choreography, it’s a thrilling story of brotherhood, family, loyalty, and betrayal during a decade of civil unrest in America. Set to the beat of the group’s treasured hits, including “My Girl,” “Just My Imagination,” “Get Ready,” and “Papa Was a Rolling Stone,” Ain’t Too Proud tells the unforgettable story of the legendary quintet that Billboard Magazine named the greatest R&B group of all time.

WICKED, THE BOOK OF MORMON AND LES MISÉRABLES Available To Add On To Subscription Packages

The Broadway sensation, looks at what happened in the Land of Oz…but from a different angle.  Long before Dorothy arrives, there is another young woman, born with emerald-green skin—smart, fiery, misunderstood, and possessing an extraordinary talent. When she meets a bubbly blonde who is exceptionally popular, their initial rivalry turns into the unlikeliest of friendships…until the world decides to call one “good,” and the other one “wicked.”

From the first electrifying note to the final breathtaking moment, WICKED—the untold true story of the Witches of Oz—transfixes audiences with its wildly inventive story that USA Today cheers is “a complete triumph! An original musical that will make you laugh, cry, and think.”

The New York Times calls it “the best musical of this century.” The Washington Post says, “It is the kind of evening that restores your faith in musicals.” And Entertainment Weekly says, “Grade A: the funniest musical of all time.” Jimmy Fallon of The Tonight Show calls it "Genius. Brilliant. Phenomenal." It’s THE BOOK OF MORMON, the nine-time Tony Award® winning Best Musical.

This outrageous musical comedy follows the adventures of a mismatched pair of missionaries, sent halfway across the world to spread the Good Word. With standing room only productions in London, on Broadway, and across North America, THE BOOK OF MORMON has truly become an international sensation. Contains explicit language.

Cameron Mackintosh presents the acclaimed production of Boublil and Schönberg’s Tony Award-winning musical phenomenon, Les Misérables. This brilliant staging has taken the world by storm and has been hailed as “a reborn dream of a production” (Daily Telegraph). Set against the backdrop of 19thcentury France, Les Misérables tells an enthralling story of broken dreams and unrequited love, passion, sacrifice and redemption–a timeless testament to the survival of the human spirit. The magnificent score of Les Misérables includes the songs “I Dreamed a Dream,” “On My Own,” “Bring Him Home,” “One Day More” and many more.