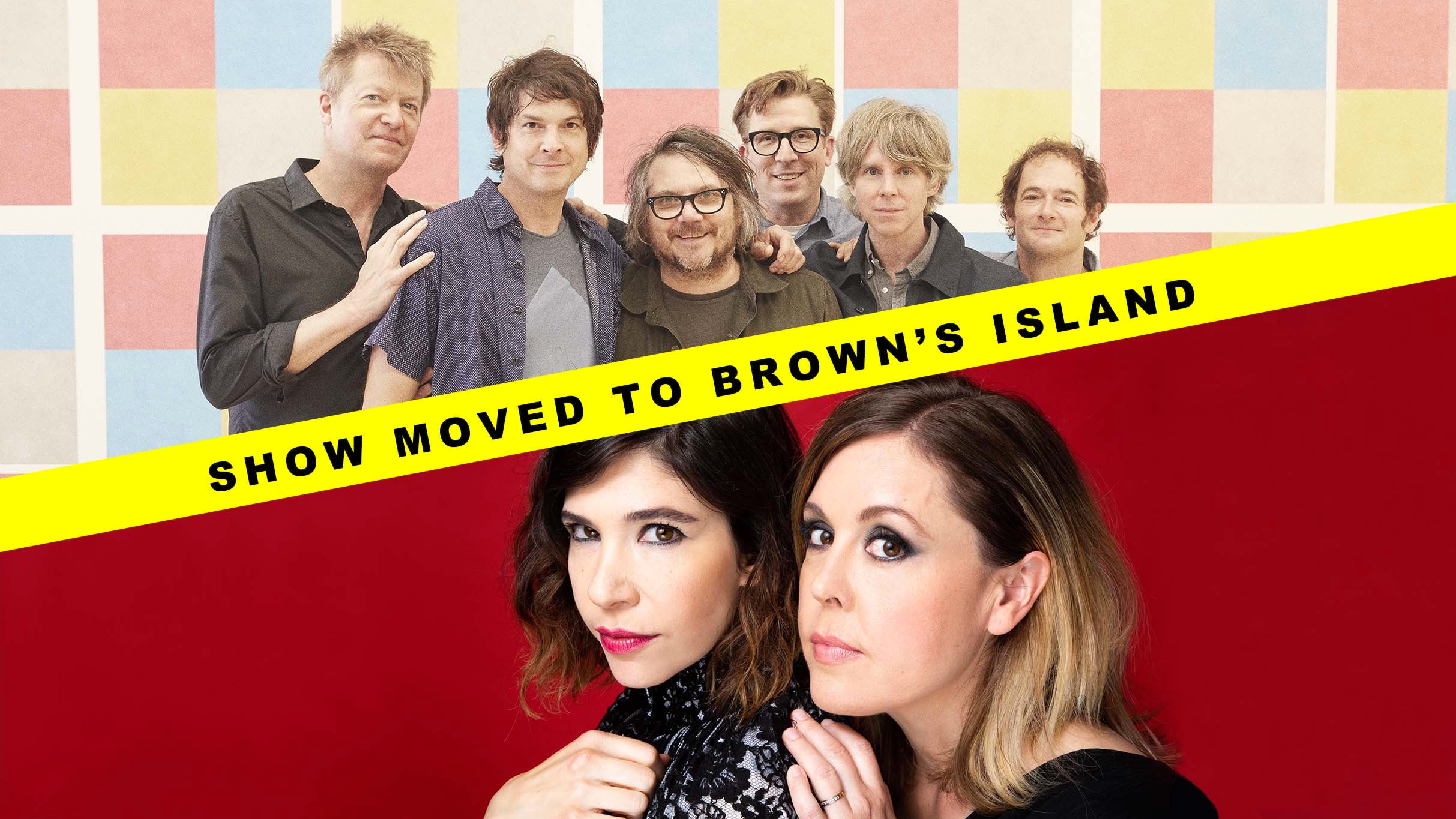 Wilco + Sleater-Kinney at Altria Theater has been moved to a new venue.

All previous tickets will be honored at the new location.

The Event Organizer is requiring that all attendees of this event must be fully vaccinated against COVID-19 or have received a professionally administered negative COVID-19 diagnostic test within 48-hours prior to entry to the event.

Wilco
Throughout the past two-plus decades Wilco has won multiple Grammy Awards, released ten studio albums, as well as a trio of albums with Billy Bragg penning music to lyrics by Woody Guthrie. They have founded their own record label (dBpm Records) and festival (Solid Sound), and 2020 sees them curating Sky Blue Sky, a destination concert experience in Mexico, for the first time. The Chicago sextet continues to be regarded as a live powerhouse, as described by NPR, “To see Wilco on stage is to hear the best of the best.” The band’s recent album, Ode To Joy, was released in Fall 2019. The band will be touring Europe and North America extensively surrounding its release.

Sleater-Kinney
The Center Won’t Hold is Sleater-Kinney’s midnight record on the doomsday clock. After 25 years of legendary collaboration, rock’n’roll giants Carrie Brownstein and Corin Tucker rise to meet the moment by digging deeper and sounding bigger than we’ve heard them yet. Here are intimate battle cries. Here are shattered songs for the shattered survivors. “The Center Won’t Hold drops you into the world of catastrophe that touches on the election,” says guitarist/vocalist Tucker of the title track. “We’re not taking it easy on the audience. That song is meant to be really heavy and dark. And almost like a mission statement, at the end of that song, it’s like we’re finding our way out of that space by becoming a rock band.”

Gather the whole 🦁 Pride 🦁(aka your family, friends, neighbors, students, colleagues) and snag group tickets for @thelionking, coming to #AltriaTheater March 9-20, 2022! Groups of 10 or more save 10% on Tuesday - Friday and Sunday evening performances. Additional savings are also available for groups of 40 or more! Call 804-592-3401 to place your order before single tickets release
It's time to take your seat 😍 Live shows are back, baby! Check out upcoming events → link in bio
We're on a journey to the past with @anastasiabway The Musical, visiting the #AltriaTheater October 26-31, 2021! Tickets are on sale now - get yours today 🎟
Only the best was worn for a night out to see @blippi the Musical 👓
@blippithemusical is in town and we’ve got a theater full of little #blippis running around 😍
Have you heard? There's a rumor in #rva...that presale tickets have unlocked for @anastasiabway ! Use code 'ANYA2' starting Wednesday, 9/15/21, at 10AM to access our exclusive online venue pre-sale and secure your seats to ANASTASIA this October 26-31, 2021. Access presale tickets → www.etix.com/ticket/e/1013636
Tonight’s show was a blessing and a miracle for our @carlossantana fans ☀️🕶🎸
That feeling when @carlossantana takes the stage for 3000+ people 🤩
The legendary @carlossantana takes the #AltriaTheater stage in t-minus 7 hours 🎸🪘🥁🎶 Raise a ✋ if we'll catch you at the show
Grab a group of friends, family, colleagues and more and join @anastasiabway on an epic adventure from the twilight of the Russian Empire to the euphoria of Paris in the 1920s! Save 10% on performances October 26-31, 2021, (excludes Saturday Matinee) at Altria Theater by placing a group sale! Call (804) 592-3401 to place your order before public tickets release.
#tbt to @elvis’s appearance at the #altriatheater in 1956 where this famous shot of him “romancing a blond fan” was taken by Al Wertheimer in a backstage hallway 👀👀 Who’s his date? @vanityfair reports Barbara Grey as the mystery woman 👩🏼‍❤️‍💋‍👨🏻
JUST ANNOUNCED → Kountry Wayne & Friends perform in Richmond, VA on 11/6 at the Altria Theater! Tickets release this Friday, 9/10, at 10AM - use code 'FUNNY' to access an exclusive venue presale starting Thursday, 9/9, from 10AM - 11:59PM. More info → https://www.altriatheater.com/events/detail/kountry-wayne/
It’s the touches of architectural beauty for me 😍 Did you know the @altriatheaterva was originally opened in 1927 and used by the Shriners as the ACCA Temple Shrine before being purchased by the @rvagov in the 1940’s and rebranded as the #MosqueTheater. The theater was then restored in 2014 and reopened as the #altriatheater featuring replicated stenciling and restoration of original murals, tile work, and historic terra cotta details! Tbh, you’ve gotta see this place for yourself 😍
When we hear you don’t have tickets to see @johncleeseofficial yet… 👀👀👀 The “one and only” comedian and actor best known for #montypythonsflyingcircus, #Ratrace, #FawltyTowers, and #aFishCalledWanda, comes to #RVA on 10/10/21! 🎟 → www.altriatheater.com
PRE-SALE ALERT: Don't miss Jo Koy and his Funny Is Funny World Tour, coming to Altria Theater on Jan 15th. Tix go on sale tomorrow at 10AM, but there is a special pre-sale from 10AM until 10PM today. Go to http://ow.ly/NG3950FPG4V and use code COMEDY.
Wilco + Sleater-Kinney at Altria Theater has been moved to Brown’s Island located at 500 Tredegar St, Richmond, Virginia 23219. August 18, 2021 at 5:45 PM (Doors at 5:00 PM) – set times will be posted! All previous tickets will be honored at the new location. IMPORTANT: The Event Organizer is requiring that all attendees of this event must be fully vaccinated against COVID-19 or have received a professionally administered negative COVID-19 diagnostic test within 48-hours prior to entry to the event.
JUST ANNOUNCED: Due to overwhelming demand, Comedian Jo Koy will bring his Funny Is Funny World Tour to Altria Theater on Sat, Jan 15th at 8:00PM. Pre-sale begins at 10:00AM on Thurs, Aug 12th, and tickets go on-sale Fri, Aug 13th at 10:00AM. Visit AltriaTheater.com
ON SALE NOW: Don't miss rapper, singer, songwriter, Lil Durk, coming to Altria Theater on Sat, Sept 18th. Tickets are on sale now. Get yours at http://ow.ly/wct250FLxie
PRE-SALE ALERT: Get your advance tix to see Lil Durk, coming to Altria Theater Sat, Sept 18. Special pre-sale today from 10AM - 10PM. Use code HEROES to get yours! Click here for access http://ow.ly/wWkL50FKZJx Tix go on sale to the public tomorrow at 10AM.
JUST ANNOUNCED: Rapper, Lil Durk, coming to Altria Theater Sept 18th. Special presale this Thurs, Aug 5th. Visit AltriaTheater.com and subscribe to our newsletter for details. Tix go on sale this Friday, Aug 6th at 10AM.
ON SALE NOW: Don't miss the holiday magic of The Elf on the Shelf - A Christmas Musical, returning to Richmond's Altria Theater on Nov 14. Tickets are on sale now and can be purchased at AltriaTheater.com.
ON SALE NOW: Tickets for Leon Bridges Presents Gold-Diggers Sound are on sale now! Don't miss the Grammy Award-winning R&B superstar, with support from Chiiild, coming to Altria Theater on May 10, 2022. Visit AltriaTheater.com for tix and details.
ON SALE NOW: Tix for the legendary Steely Dan and The Absolutely Normal Tour are on sale now! Get your tickets to the Oct 23rd show at Altria Theater while they last! Visit AltriaTheater.com for details.
PRE-SALE ALERT: Grammy Award-winning R&B superstar Leon Bridges is coming to Altria Theater on May 10, 2022. Tickets go on sale tomorrow, but there is a special pre-sale today, from 1PM - 10PM. Use code MOTORBIKE to get yours! Click here for details http://ow.ly/REVd50FGfQA
PRE-SALE ALERT: Don't miss this opportunity to get tickets for Steely Dan before they go on sale to the public. Special pre-sale today from 10AM - 10PM. Use code SUNNY to get yours! Public on sale tomorrow, Fri, July 30th. Click here for details http://ow.ly/MfRn50FGdQ1